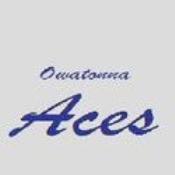 Welcome
This is the official site of Owatonna Aces

Owatonna was once the hotbed of southern Minnesota baseball, dating back to the 1910's. For a town of only 7,000, there was an overwhelming abundance of baseball talent. Besides the one semi-pro team, the Owatonna Indians, there were the Owls, the Marines, the Wolves, the Sokols, the Eastend Gophers, the Merchants, the Aces and the Cubs, all amateur teams. The Owatonna Indians got their start in the late 1910's, but were not officially entered in any league.

On Wednesday, April 5, 1922, representatives from Owatonna, Janesville, Adams, Blooming Prairie, Austin, Albert Lea, Mankato and Rochester met in Owatonna to form an association called the Southern Minnesota Baseball League. Although the amateur Aces never really made much of a showing in baseball circles in Owatonna, the Indians continued to stay in the thick of the battle in the Southern Minnesota league. In 1929 the Indians split up.

A new baseball league was formed in 1930 called the DFS Tri-County league. The league had teams from Dodge, Steele and Freeborn Counties in it. The Owatonna Aces, who had steadily climbed to prominence, was the only local team in the league. In 1933, the Aces went to the finals of the state tournament at Lexington Park in St. Paul, where they lost 7-0 to St. Peter for the championship. The big city teams labeled the Owatonna Aces as just a cow-pasture team that didn't know how to play the game. In 1934, the Aces decided that they should rightfully represent Owatonna in the Southern Minnesota League.

Bsoskie felt that the opening game of each season should be preceded by an official ceremony. So, in 1936, the opening day program included a parade, a concert of the Owatonna High School band, a pennant presentation, flag raising and official opening by city officials. With the help of the Owatonna people, Bob Bzoskie rebuilt the grandstands, installed box seats, built new bleachers and resurfaced the infield. Owatonna had one of the first skin diamonds with infield grass. Dartt's also had the first press box in Southern Minnesota. In 1939, Owatonna had the first neon-lighted scoreboard in the nation. Even the big league teams didn't even have them. Three teams, the New York Yankees, Chicago Cubs and St. Louis Cardinals, came down to ask Bzoskie to help them build one. Bzoskie went on to help direct the building of the Waseca, Rochester, Faribault and Mankato ballparks.

In 1938 the Aces won the Southern Minnesota and Region 5 titles, and went to the State Tournament once more. They won the state title in an eleven-inning victory over Cloquet 3-2. With the victory, the Aces, who were Class A Champions, played Class AA champion Northern States Envelops of St. Paul, at Dartt's Park. The winner was to represent Minnesota in the national tournament the fall of 1939 at Battle Creek, Michigan. The Aces defeated the St. Paul team 2-0.

The Aces went to Battle Creek known as the butter capital of the world. They took 50 pounds of butter along with them to the national tournament and passed it around to everybody there. The Aces defeated Fork, South Carolina 13-3 in the fir